The Programmable Scale Generator exceeds the possibilities of an ordinary quantiser module. 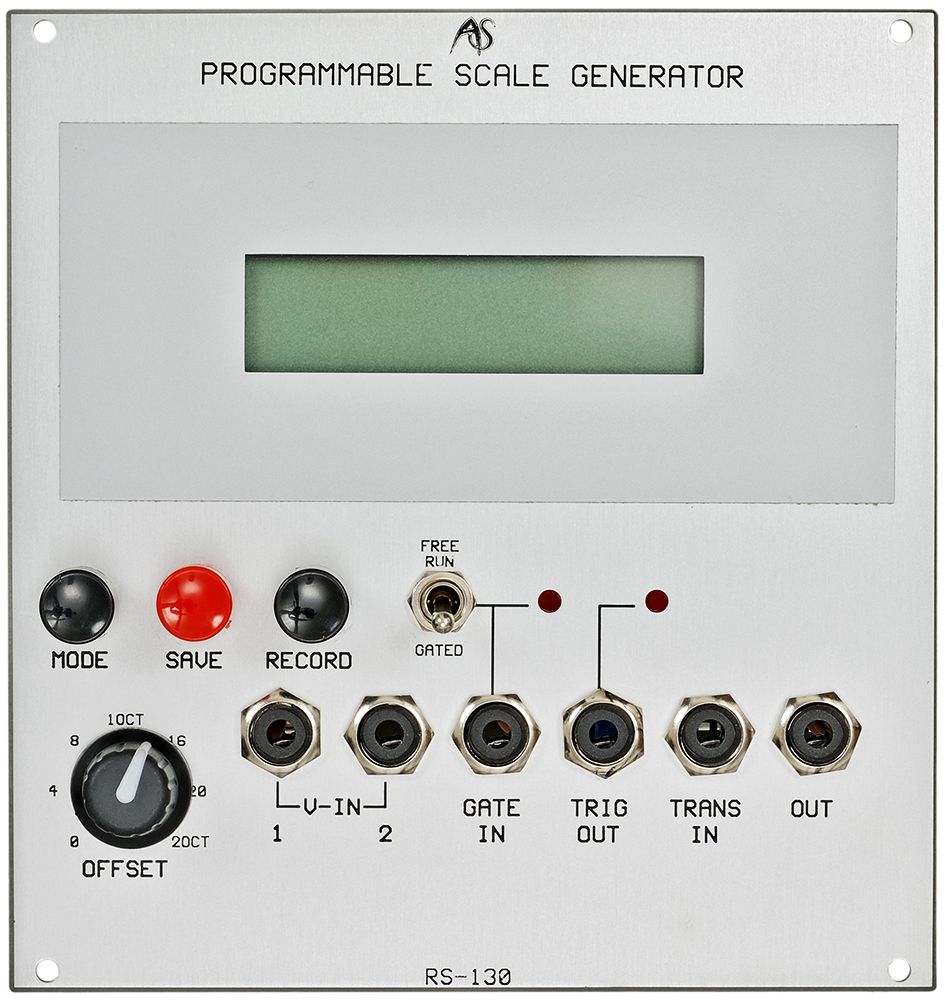 The Programmable Scale Generator exceeds the possibilities of an ordinary quantiser module.

While a quantiser usually is chromatic only and with a little luck it allows major and minor scales, a programmable scale generator like the RS-130 makes it possible to freely program scales beyond the customary semitone scale with all their derivates.

Scales with quarter-note or eighth-note intervals are possbile which is important e.g. for indian or oriental music.

Two modes determine when quantisation takes place: in "free run" it happens only when input voltage changes. In "gate" mode quantisation happens when the RS-130 receives a gate signal.

Use the MODE button to step through the Quantisation Modes.

This is used to SAVE a user-programmed scale (see below: Programming the User Memory).

This is used to RECORD the notes within a user-programmed scale (see below: Programming the User Memory).

There are timing modes, selected using the FREE RUN/GATE switch.

In Free Run, the RS-130 outputs a new C V every time the mixed input CV changes enough to move from one note to another.

In Gated mode, the RS-130 requires a pulse to tell the device when to determine the next note.

You can apply a fixed transposition (offset) of up to 2V (2 octaves) to the input. You can also use this control to program a scale, but you will then be limited to the 2 octave range it offers. If you wish to program notes across the full 5 octave range of the RS-130 you should use a 0V to +5V CV source from another module.

If the Quantiser is in GATE mode, you must apply a Gate pulse in the range +1V to +20V to this input to cause it to determine the next output voltage. The output is determined on the positive-going edge of the pulse, and will be held until the next positive-going pulse is received. The GATE IN LED will light when a suitable pulse is detected at the GATE IN.

A +10v trigger pulse is output every time the output voltage shifts. In FREE RUN mode the timing of this trigger will be determined by the voltages received at V-IN 1 and V-IN 2. In GATED mode, the output trigger will echo the leading edge of the pulses received at the GATE IN. The TRIG OUT LED will light each time a trigger is output.

You can use this trigger to perform tasks such as clocking a sequencer, or triggering an envelope generator so that each new note is articulated independently of previous notes.

Any voltage applied at the TRANS IN input will be added to the quantised output derived from V-IN 1 and V-IN 2. This will transpose the output up or down allowing you, for example, to fine-tune the output to match the tuning of other instruments. Note however that TRANS IN operates after the Quantiser circuit, so any voltage applied here will shift the output by an unquantised amount.

There is a single output that carries the quantised CV.

Use the MODE button to select the Quantiser mode.

Now use an external voltage source connected to either of the V-IN sockets, or use the OFFSET control, to select the notes in the desired scale, as follows :

Starting from the bottom of the range, you should sweep slowly upwards through the chromatic scale.

Then, each time the display shows one of the notes that you wis h to includ e in the scale, press RECORD.

For example, if you have decided that the first note in your scale is to be the Ab in the lowest octave, the RS-130 screen will look like this:

The four parts of the screen show:

If this duplication of note information seems odd, it makes more sense when you choose the next note in the scale. Let's say that the next note is to be Eb in the octave above the first note. The screen will now look like this:

The two NOTE names now allow you to see the previous note in the scale, plus the current note. This makes it simpler to see how your scale is developing.

If you now press RECORD, the screen will change to show that NOTE Eb+1 is stored in POSITION 2.

When you have incorporated all the notes you require, press SAVE to store the scale into the single User Memory. This memory in non-volatile, and it will retain your scale even when the power to the Integrator is removed.

Note 1: Do not RECORD the same note twice. It will confuse the PSG and lead to unpredictable results.

Note 2: Always RECORD your scale in one direction. Do not alternate between "up" and "down" when selecting the notes. To do so will cause problems when User Memory Mode is selected and you try to use the scale.

If you use the OFFSET control to program a scale you will be limited to the 2 octave range it offers. If you wish to use the full 5 octave range of the RS-130 you must use a 0V to +5V CV source from another module.

To replace an existing scale, simply return to Quantiser mode and repeat the exercise.