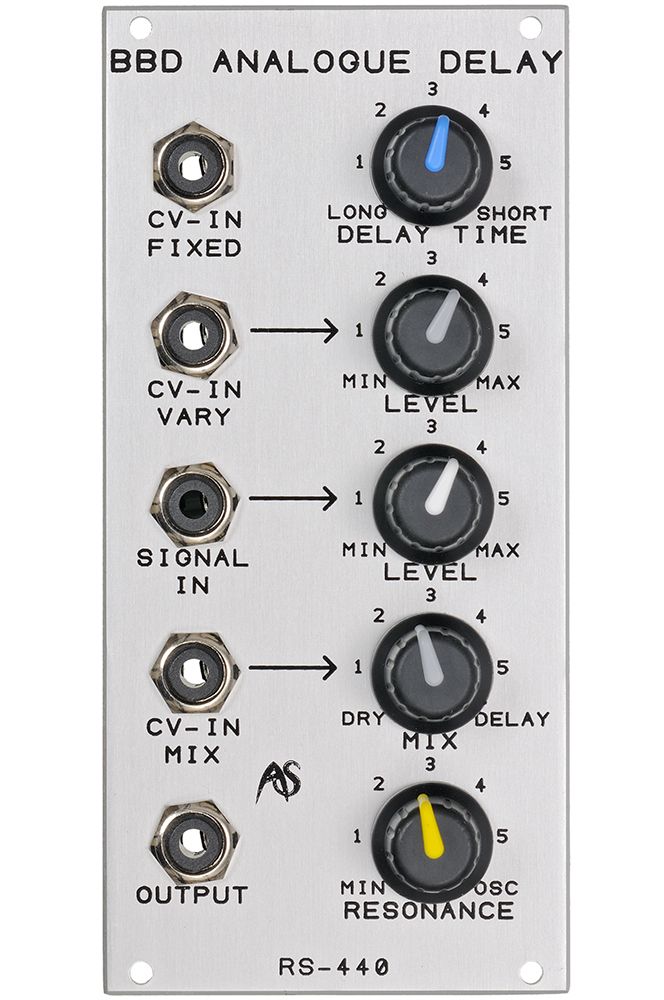 Today, we tend to take digital delay lines (DDLs) for granted. Just present an electronic signal to an analogue-to-digital converter, sample its voltage as a 16- or 24- bit number 96,000 times per second and then use a powerful processor to manipulate the numbers to create the effect you want. But a decade before these existed there were analogue delay lines (ADLs) that worked on a very similar principle but used a series of capacitors rather than high-resolution numbers to measure and store the 'samples', plus a set of electronic switches to pass the stored voltages from one capacitor to the next. With an anti-aliasing filter at the input to the ladder of switches and capacitors, and a reconstruction filter at its output, the complete assembly was encapsulated in a chip known as a Bucket Brigade Device (or BBD), so named because the operation of passing sampled voltages along a line of capacitors is analogous to passing buckets of water along a line of people.

Unfortunately, the sampling precision of a series of miniature capacitors is far less than that of today's digital electronics, and it's impractical to ask an ADL to operate at the high rates of modern digital systems. These constraints have at least three consequences. Firstly, the bandwidth of an ADL is almost certainly less than that of a half-decent DDL. Secondly, the maximum length of the delay is likely to be much shorter than that of a half-decent DDL. Thirdly, unlike the near-perfect reproduction of a half-decent DDL, the signal that emerges from the back end of an ADL is likely to be no better than a noisy approximation to the original, and the longer the delay line, the worse this situation becomes.

Consequently, you would be forgiven for thinking that BBD-based analogue delay lines are ghastly pieces of junk best consigned to the dustbin of audio failures. And inevitably (or I wouldn't have mentioned it) you would be wrong. BBDs are the basis of many of the most important musical devices ever developed. For example, if you modulate the rate of the clock that determines when the switches in the delay line open and close, you can modulate the pitch of the output signal. If you then mix the delayed signal with the original you can create all manner of effects including chorus and flanging. Place a number of delay lines in parallel and modulate them independently, and you can create the wonderful, lush ensemble effects of strings synths and some early polysynths. With a bit of sophistication, you can emulate Leslie (rotary) speakers, create passable reverberation, and even delve into the realms of frequency modulation (FM) and phase distortion (PD) synthesis. Oh yes, and you can even use an analogue delay line as… a delay line!

Of course, things are never as simple as they seem, and BBD-based effects units were often horrid affairs that mangled the signal, introduced all manner of distortions, and were prone to generate horrendous internal feedback loops. Or, depending upon your perspective, BBD-based effects units are often wonderful affairs that mangle the signal, introduce all manner of distortions, and are prone to generating horrendous internal feedback loops. Either way, analogue delays are important tools that can greatly expand the range of sounds that you can obtain from your synthesisers and other sound sources.

The RS-440 is a monophonic analogue delay line based upon a single MN3011 bucket brigade device. This incorporates six "taps" at quasi-random delay points and with differing output levels, but only one of these - the longest - is used to generate simple delays.It offers a single delay range with CV control of the delay time, control over the amount of internal feedback ("resonance"), and CV control of the dry/wet mix.

If no CV is applied at the CV-IN FIXED or CV-IN VARY inputs, the DELAY TIME control allows you to adjust the delay from approximately 75ms ("short") to 500ms ("long"). The clock signal will be audible as a high-pitched whistle when delays of above 300ms or so are used (i.e. the DELAY TIME knob lies between "LONG" and "2"). You can attenuate this using a low-pass Þ lter if required.You can extend the delay range from 50ms to 2,000ms by applying CVs in the range ±10V to the CV-IN FIXED input. Note, however, that the audio quality is further degraded at delays exceeding 500ms, so longer times will be most useful for special effects.

You can also modify the DELAY TIME by applying a suitable ±10V control voltage to the CV-IN VARY input, and you can control the depth of its effect using the associated LEVEL control.

The MIX control allows you to determine the amount of delayed signal contained in the output. At its furthest anticlockwise position only the original signal passes, and no control (other than the audio signal input level) affects the output. As you rotate the MIX control clockwise, more and more of the delayed signal is added until, at its furthest clockwise extreme, this predominates. However, the original is always present at the output - it is not removed as the delayed signal is added.You can modulate the MIX by applying a CV in the range ±10V to the CV-IN MIX input.

The RS-440 has positive feedback from its output to its input. As you increase the amount of this feedback using the RESONANCE control, the unit will feed a greater and greater amount of the output back to the input.At minimum RESONANCE, the RS-440 has zero feedback and, if you feed a single click into the unit, it will generate a single delay. As you increase the RESONANCE, a succession of clicks will become audible. At somewhere between the 12 o'clock position and maximum, the gain of the feedback circuit will exceed unity, and the delayed signals will not fade away. Finally, as the RESONANCE approaches its maximum, the RS-440 will self-oscillate and generate a complex tone, even in the absence of an input.

Set the DELAY TIME as close as possible to "long" without clock noise intruding on the signal. No modulating CVs are required. Set the MIX to approximately "12 o'clock" and adjust the RESONANCE so that the effect dies away in a pleasing fashion. This setting will probably lie in the range "1" to "3". You can increase the density of the effect by increasing the MIX and RESONANCE settings, but you should not allow the unit to loop the echoes infinitely, nor allow it to self-oscillate.

Set the DELAY TIME close to "short" and apply a low-frequency sine wave or triangle wave to the CV-IN VARY input. Depending on the effect required, the modulation frequency should lie in the range 0.3Hz to a few Hz. Adjust the CV-IN LEVEL control so that the modulation depth is low (i.e. the DELAY TIME is swept just slightly). This will typically require a setting of no more than "2". Set the MIX to its maximum and adjust the RESONANCE so that no self-oscillation occurs - perhaps "3" on the scale.

With no signal applied to the SIGNAL IN, turn the DELAY TIME to "long" and the CV-IN MIX to its maximum. Now increase the RESONANCE from its minimum to its maximum. Adjust the DELAY TIME manually to generate a range of effects. Alternatively, modulate the delay time by applying any signal of choice (including audio frequencies) to the CV-IN VARY input and adjusting the amount of modulation as required.

The signal goes through the RS-240 frequency shifter which is modulated a bit, and also the RS-440 delay.