The RS-70 module combines an inverter with integrated slew limiter and also a pre-amp. 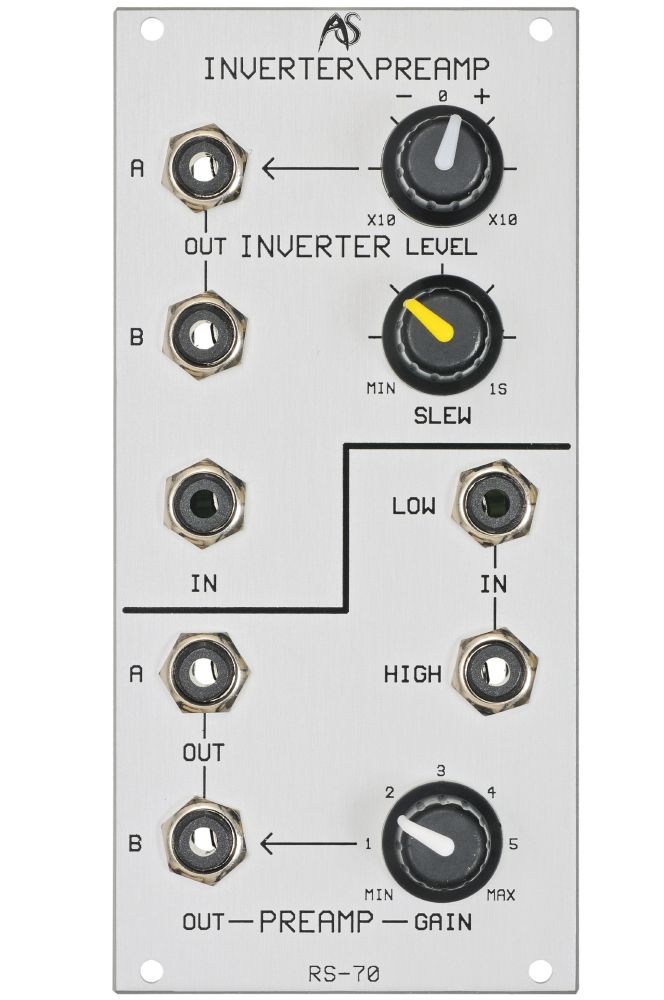 The Inverter should be described as a polarizer, to be exact, as the input signal can be blended from negative to positive with a level control.

The gain control ranges from approximately -2dB in its fully anticlockwise position to 21dB in its fully clockwise position, depending upon the input used. Input signals with a level of ±10V will be processed without problems, above those ranges clipping will occur and thus the module will distort which can be a desired effect.

The output signal is present at two jacks.

An inverter is an example of a ' Voltage Processor'. It produces no signal of its own, but affects those presented to its input.

The result of the process depends upon the nature of the source signal and, since CVs as well as audio signals may be inverted, a wide range of effects can be generated.

For example, you could present a keyboard CV to the Inverter. This means that, as you play up the keyboard (and, therefore as the keyboard CV increases) the voltage generated by the inverter will decrease.

One obvious use for this is to make the pitch of an oscillator descend rather than ascend as you play up the keyboard. Alternatively, you could also pass the inverted CV to a VCA so that high notes are quieter than low ones. This allows you to crossfade between sounds as you play different notes.

You can also invert audio signals so that the resulting signal is 'out of phase' with respect to the original. On its own, this has no audible effect, but when the signals are combined they can create cancellation and 'phasing' effects. Modulating and/or delaying one of these signals generates many other complex sounds.