The RS-650 Echo Reverb is a combination of the RS-310 and RS-440 which are based on the same circuit. It offers both delay (echo) and reverb settings in one module. 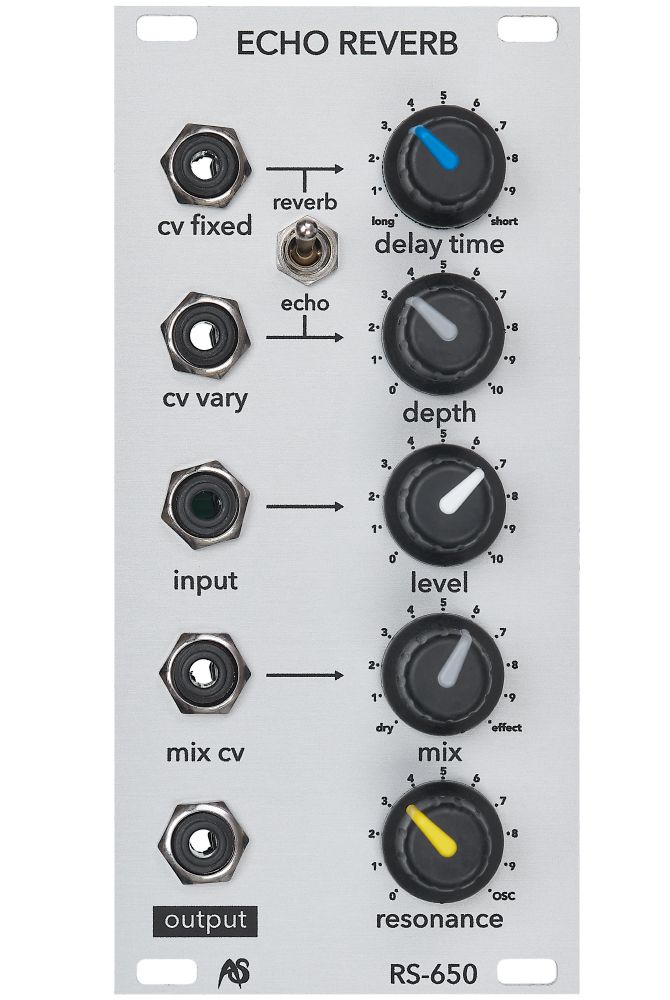 It offers both delay (echo) and reverb settings in one module. It is based on a bucket brigade device (BBD) with six parallel delay taps. Those six delay times have no relationship to each other and their outputs have different levels. You have to consider the reverb effect as a mixture of six different short delays what results in a dense sound.

The clock frequency which scans the bucket brigade is audible and you´ll have to use a low pass filter in order to eliminate or minimize it. In Reverb mode the delay time can be set between 2.5ms and 150ms and in Echo mode it spans from 75ms to 200ms.

The RS-650 is a monophonic analogue delay line based upon a single MN3011 bucket brigade device. It can be used as a delay or reverb, depending on the switch. It incorporates six "taps" at quasi-random delay points and with differing output levels, but only one of these - the longest - is used to generate simple delays.It offers a single delay range with CV control of the delay time, control over the amount of internal feedback ("resonance"), and CV control of the dry/wet mix.

If no CV is applied at the CV-IN FIXED or CV-IN VARY inputs, the DELAY TIME control allows you to adjust the delay from approximately 2,5ms ("Reverb" mode) to 200ms ("Echo" mode), with control voltages even up to 2000ms. The clock signal will be audible as a high-pitched whistle when delays of above 300ms or so are used. You can attenuate this using a low-pass filter if required.You can extend the delay range by applying CVs in the range ±10V to the CV-IN FIXED input. Note, however, that the audio quality is further degraded at delays exceeding 500ms, so longer times will be most useful for special effects.

You can also modify the DELAY TIME by applying a suitable ±10V control voltage to the CV-IN VARY input, and you can control the depth of its effect using the associated DEPTH control.

The MIX control allows you to determine the amount of delayed signal contained in the output. At its furthest anticlockwise position only the original signal passes, and no control (other than the audio signal input level) affects the output. As you rotate the MIX control clockwise, more and more of the delayed signal is added until, at its furthest clockwise extreme, this predominates. However, the original is always present at the output - it is not removed as the delayed signal is added.You can modulate the MIX by applying a CV in the range ±10V to the CV-IN MIX input.

The RS-650 has positive feedback from its output to its input. As you increase the amount of this feedback using the RESONANCE control, the unit will feed a greater and greater amount of the output back to the input. At minimum RESONANCE, the RS-650 has zero feedback and, if you feed a single click into the unit, it will generate a single delay. As you increase the RESONANCE, a succession of clicks will become audible. At somewhere between the 12 o'clock position and maximum, the gain of the feedback circuit will exceed unity, and the delayed signals will not fade away. Finally, as the RESONANCE approaches its maximum, the RS-650 will self-oscillate and generate a complex tone, even in the absence of an input.