Genuine Ems synthi filter. This legendary filter can be switched between pre 1974 and post 1974 filter type and response. For the first time, response can be voltage controlled which was designed on the circuit board but not available on the matrix. This module is made under license from Ems. It has a new front panel design with elongated holes. 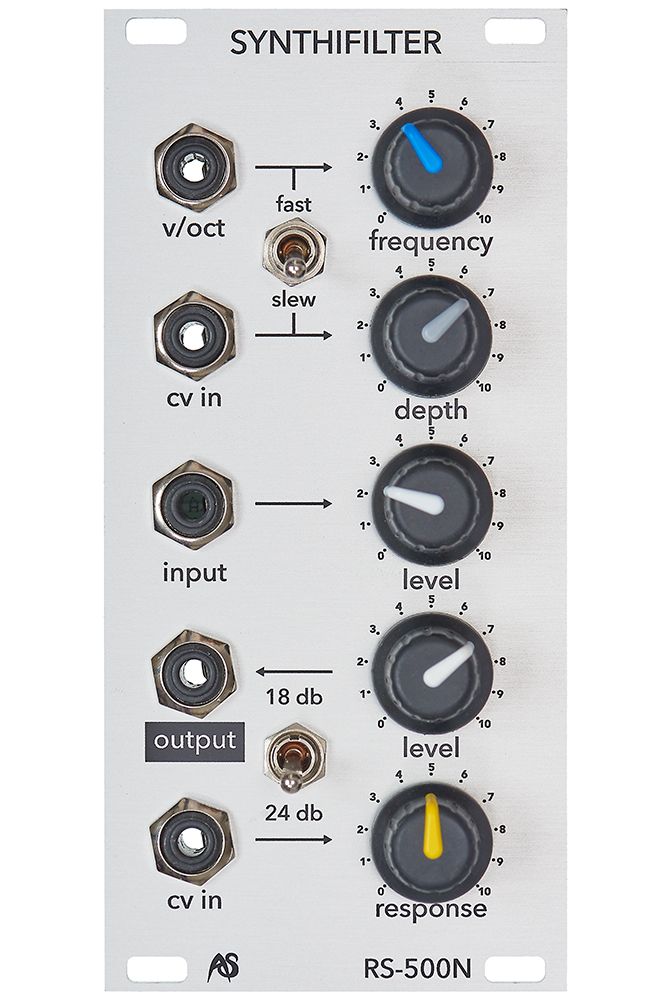 The various models of EMS VCS3 and Synthi rank among the most desirable of all vintage synthesizers. Designed in England between the late 1960s and mid 1980s, these eschewed common designs and control mechanisms, and performed very differently from synthesizers manufactured in America and Japan. The earliest commercial Synthi (although not called by that name) and by far the most famous, was the VCS3. This was later joined by the Synthi A, Synthi AKS, the monstrous Synthi100, and the Synthi E. (For further information about these,please refer to the chapter entitled "The EMS Story" found before the appendices in this manual.) The RS-500N low-pass filter for the RS Integrator was recreated by former EMS engineer Steve Gay and is, as far as possible, an exact reproduction of the filter within these synthesizers. Although there are minor differences between the circuitry in the RS-500N and the originals, most have been made specifically so that the EMS circuit will fit the RS Integrator format. Other modifications allow it to handle modern signal levels and control voltages. In addition, the RS-500N offers three facilities not found on unmodified EMS synthesizers. These allow you to use the filter in ways not possible on an original Synthi. The additional facilities are:

"Response" was the EMS term for filter resonance. EMS synthesizers allowed you to alter this using a knob, but they did not provide for voltage control. Fortunately, it has been simple to add a CV input to control the Response. This has not altered the filter's sound.

Due to a capacitor that slewed incoming control voltages, the cut-off frequencies of early EMS filters responded slowly to changes in incoming CVs. The consequence of this was obvious when you tried to create snappy, percussive sounds on a Synthi... you couldn't. The RS-500N allows you to switch this capacitor out of the circuit, allowing you to program significantly different types of sound.

Until early 1974, all VCS3s and Synthis were fitted with filters that rolled-off at 18dB/octave. But in response to market forces, later models offered the more common slope of 24dB/octave. Although this was in some respects an improvement, it came at a price... the sound of the filter changed, and many players stated a preference for the earlier design.

Happily, you don't have to choose between one or the other when configuring your RS Integrator. The RS-500N offers both filter characteristics, selectable using a simple front-panel switch.

Note: The CV slew switch and the 18dB/24dB filter options were - and remain - standard modifications for vintage EMS instruments.

The RS-500N is a low-pass filter with variable resonance. It is modelled on the filters produced for EMS synthesisers, and shares their principle sonic characteristics.

Changing the filter slope alters the way in which upper frequencies are removed from an audio signal passing through the device. This change can be subtle or obvious, and can be the single most defining characteristic of an analogue synthesizer.

The RS-500N has variable resonance, which on early EMS synthesizers was called "Response".

As this is increased from its minimum, the filter will accentuate Fc, and will attenuate frequencies below Fc as well as those above it. As the resonance is increased further, the RS-500N will exhibit 'ringing', and will strongly color any signal passing through it. At high resonance, the filter will begin to oscillate, and it will then act as an audio signal generator, the frequency of which is Fc itself.

The RS-500N has a single audio input: SIG IN, with an associated LEVEL control. This input accepts signals in the range ±10v.

There is a single output with an associated LEVEL control. This carries a signal in the range ±10v.

Two sounds using the RS-500 EMS filter, played by hand plus some reverb.


From Putney with love